Working on this creative practice research project was an extraordinary experience – a wonderful opportunity to work in an art rather than historical space and to work with both indigenous and Indonesian communities.

‘What was, what is and what can be’ was the overarching theme of the project. The aim was to understand the deep relationship that flourished between fishers from Makassar and indigenous groups across northern Australia pre-European contact; to reflect on what that means today and to reimagine, though art, what it might be into the future.

The project brought together, in both Makassar and East Arnhem Land, three artists from Makassar (Adi Gunawan, Nurabdiansyah and Muhammad Rais from Rumata’ Artspace) with three artists from Yirrkala, East Arnhem Land (Barayuwa Mununggurr, Arian Pearson and Dion Marimunuk Gurruwiwi from the Buku-Larrŋgay Mulka Centre). Film-maker Daniel King was employed to create a film documentary of the project.

The artist exchange ran over ten days from 2-12 December 2018. We all met in Makassar where we participated in a public symposium at the Universitas Hasanuddin. Our cultural visits included watching trepang (sea cucumber) being processed and dried, listening to some magnificent traditional drumming in a village in Galesong and viewing Yolgnu artefacts at the Balla Lompoa Museum. After learning about the boat-making skills of the Bugis fishers we shared a specular sunset voyage on a traditional Pinisi.

We then travelled via Darwin (and a behind the scenes tour of Makassan material at the Museum and Art Gallery of the Northern Territory) to Yirrkala and the Buku-Larrngay Mulka Centre, crammed full of award-winning Yolngu art. But everything really came together at the Bawaka homelands where we all experienced how vital the Makassan relationship is to Yolngu today.

An exhibition of the resulting artists’ work was launched at Rumata’ Artspace in Makassar, Indonesia on 30 June 2019.

Daniel King’s ‘Trading Cultures’ film which documented the project will be launched at the Victorian College of the Arts, University of Melbourne on 8 November 2019. 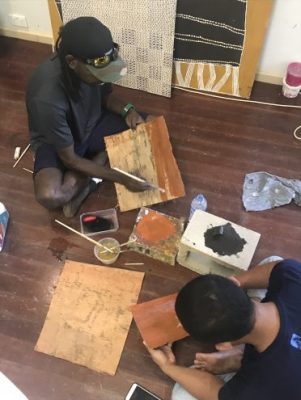